I hope so far, you guys have had a good week food wise. Feel free to email me your recipes at my email TheMakingofAChef@Gmail.com . Though, I did tweet and say that I wouldn’t talk about what happened Monday when I decided to try my hand at a Thai inspired recipe, I have decided to discuss it briefly, however the main focus will be on my adventure down to Moe’s Southwest Bar and Grill followed by a trip to a Cupcake & Confections shop (which, you have no idea how thrilled I was to come across one of those, for I had no idea they actually existed).

Monday morning, I woke up at a beautiful 10 am, put my hair up and decided that I had best make use of that chicken in the fridge. So, grabbing my camera, laptop, and telephone, I headed upstairs. Last week, while I was making risotto, to get inspired, I decided to put on some Dean Martin & Frank Sinatra to listen to. The aroma that wafted about the kitchen, in addition to the good taste in music made enjoying the end product all the better. All that was missing, unfortunately, was a good glass of red wine. This week, I wasn’t feeling anything in particular while I was cooking so I jammed out to a generic playlist that Pandora created for me based off of my love for Coldplay. As with last week, the prep killed me. Gathering the ingredients was a big portion and required that I go to the store, thankfully I shopped last week and got everything I would need for these two recipes while I was out last week. Going to the pantry, I pulled out the bottle of soy sauce, the garlic-onion sauce and sugar, setting them on the counter and grabbed a small frying pan. Measuring out the sugar and sauces, I poured them into the pan and let it cook over medium low heat, as the recipe called for, until the sugar was dissolved into the mixture. The next step in the process was to sautee up the chicken and garlic, then add the broccoli.

Let me digress, and I’ll do my best to be as polite as possible. There was a reason I called it a disaster. The person who wrote up this recipe (and I’ll link to my edit on this) left the person cooking for disaster. Yes, I sauteed up the chicken and broccoli until it was all cooked, great. But, when I looked at the next step, where the recipe said to stir in the rice noodes and coat them with sauce, I shook my head. Hi, that would not work. Those rice noodles would not have cooked. That was barely a fourth of a cup of sauce (even after I added another portion of it to the stir fry later on) and there was no way it would cook the noodles. The noodle package says on it, “soak in warm water for 30-45 minutes, or until soft, yet firm before adding to Pad Thai or other stir fry recipes.” Hey lady, when you wrote up your recipe, why was the first step of your “procedure” not “soak rice noodles for 30-45 minutes while you do prep work?” Hm? If that were a Science experiment you would have -failed-, all because your recipe was simple, yes, but you left out key parts. 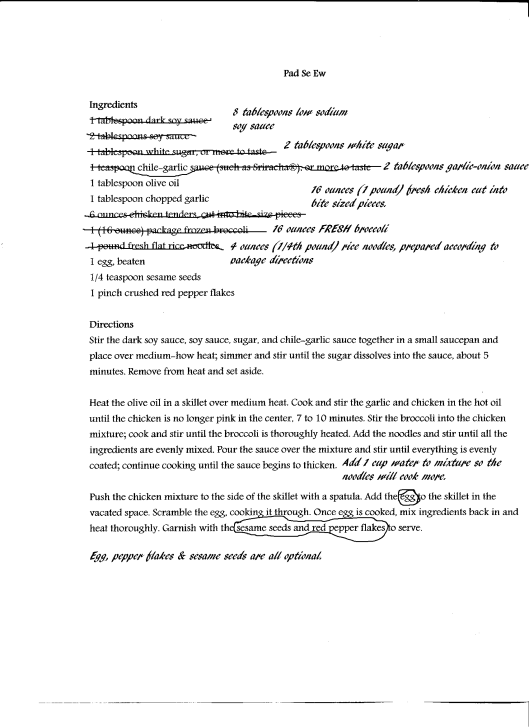 This is what happens when I find a better way to do your recipe...

I ended up pulling all of my stuff off the burner and then setting half of the needed rice noodles in to a casserole dish to soak. While the noodles soaked, I went to instead grab a shower and read a chapter in a book. By the time I came back to the kitchen, the noodles were still firmer than I’d have liked, but I wasn’t going to put off cooking any longer, my sauce was already thickening from having sat and it took on a goo almost consistency. So, I stirred in the noodles, of which it was a 3:1 ratio of noodles to broccoli & chicken mixture (you bet I’ll have a note about that in a bit) and then added the sauce. The sauce, excuse me while I snort aloud, was nowhere near enough and was far too… ugh, all because the noodles weren’t cooked. Going back to the pan, I added a cup and a half of water throughout the mixture, cranked the heat up to 7 and put the lid on. When I came back ten minutes later, it was a definite improvement and actually eatable. Hell, I enjoyed it so much, I was eating it from the pan with a pair of chopsticks.

Yeah, I lied to you guys, I said I wouldn’t talk about that ordeal, but I’m kind of thankful I did, what kind of person would I be if I left you guys to make the same mistake I made? I’d be awful, I know. Next, I did promise my promenade adventures concerning burritos and cupcakes. I don’t know about you guys, but nothing quite makes my day like walking through home goods shops, getting cupcakes and eating burritos. Seriously, My day was -made-, and on top of it all, it was my anniversary with The Boyfriend. I was surprised when he let me indulge and drag him to a home good’s store for my inner foodie. It wasn’t Le Gourmet Chef, but this other place (the name now evades me, bugger) and while he was trying samples, I was “Ooohing” at the various cookwares. While walking through the shop, I almost broke down and bought a few jars of their kitchen fresh basil and tomato sauce to give a go back in my own kitchen, it looked tempting enough. While on that note! When we were looking at the goodies being prepared in front of us (and having the sale’s associates asking whether we needed help or not) I was absolutely in heaven just looking at the kitchen set up. As my boyfriend put it, “It’s like the set of one of those cooking shows” and that’s a set up I would kill to have. Wall ovens, a stove, my pantries right there, the refrigerator right there, it was small, yet efficient. Truth be told, I love the idea of a French kitchen, large, yes, equipped, yes, I know I’ll have to settle for a smaller kitchen, but a girl can hope.

After walking through more shops (Pottery Barn & Anthropologie, anyone?) We made our way back down the shops and came across Ganache: Cupcakes and Confections. I was skeptical, but every bit of it drained away when we walked in. Though the shop was empty save for sales associates, the displays were full of, you guessed it, cupcakes and other goodies. Now, if you’ve followed me since my other blog, you’ll know I’m a demon for cupcakes. I may hate baking and pastry arts and turn my nose up at that general branch of cooking (because I’m a snob, yes), but I absolutely adore making cupcakes and cakes. For both my boyfriend and his brother, I made them cakes this year, frossed, iced and even decorated, but other than that, I will never, ever, want to go into pastry arts, I’ll always leave that to someone else. Digression aside, the cupcakes were beautiful, better than anything I could ever hope to make. Though I desperately wanted to try a cupcake, I figured it best if we came back.

The Boyfriend and I made our way to Moe’s Southwest Bar & Grill. If you’ve not heard of this place, it’s the best place to get burritos around (so far) and once you’ve had it (or so my Grandfather claims), you’ll never want to go back to Taco Bell. That’s a true enough story, sure you can get, cheap, Texi-Mexi junk locally, but the drive and price is worth it. The burritos are artfully done and equally layered throughout instead of eating a wall of beans, followed by a wall of sour cream, followed by a wall of beef, etc. AND: it’s set up almost like Subway, in that you get to see it made in front of you, and pick/choose what you want in it. Today, I went with a steak “Home Wrecker” with green peppers, onion, lettuce, and salsa. In addition to that, it’s a given that they put their rice in it. It’s like a symphony in your mouth when you eat it, and I swear by it. My grandfather is a genius at discovering the best places to eat, because, yes, I was at first skeptical about the burrito, but you have to take my word, it’s abolsutely divine and I couldn’t make a burrito better myself.

Moving back to the cupcake store. I was all sorts of happy to find this place, as I’ve mentioned. It gives me hopes that my Boyfriend will be an absolute darling and pick me up half a dozen just because. I actually told him, if he did that, I may just love him forever and no other gifts would be needed, ever. So we went in to this place and while it was still quiet, the sales associate was an absolute sweetheart. She was very polite, sweet, I wanted to tip her though all I had on me was my card. But, I gave my contribution to the store and ordered a half a dozen cupcakes. Three for me, three for the boyfriend. I went with all chocolate, he went with strawberry. My picks specifically (and I recommend them) were the Chocolate Mousse cupcake (which I ate in the car, heaven!), The Coffee Toffee cupcake (which I just ate now, so divine) and the still uneaten, Chocolate Peanut Butter Cup cupcake. My boyfriend’s picks were: Strawberry Daiquiri cupcake, Red Velvet cupcake (which looked really good and he ate in the car), and one other that escapes my mind.

I may note: No, we did not share our cupcakes with his or my families. Call us selfish, but, nope, they were too good to share. Though, I did tell Mom about the place in hopes that perhaps I can convince her to pick up some… (Once again, a girl can hope!)

So, that’s been my week thus far. Since the weather insists on being rainy, I’ve decided that I want to make up a macaroni and cheese casserole and some good old baked chicken for lunch/dinner tomorrow. I can taste it already. Hopefully I won’t have to go Severus Snape on that recipe as well. I hope not, it certainly looks easy enough (so easy, in fact, that I could make it without the recipe). You can expect a discussion about that as my next post, or if I don’t get to that in time, I’ll most certainly have a football related blog post for you lot on Sunday. Until then…