Rainy days like today are the quintessential day for cooking. There’s nothing more peaceful than listening to music (my choice for today was Dave Matthews Band) with the backdrop of falling rain from the open windows. The air outside may be crisp and cold, but it is of no matter because of the time spent hovering between the warm stove top and the counter. The best bit, however, is that even though the windows are thrown open, there is still the divine aroma of things cooking; of my passion being wrought into food for people to enjoy.

I started out the afternoon with salsa. In order to make it, I gathered my ingredients on top of the stove. 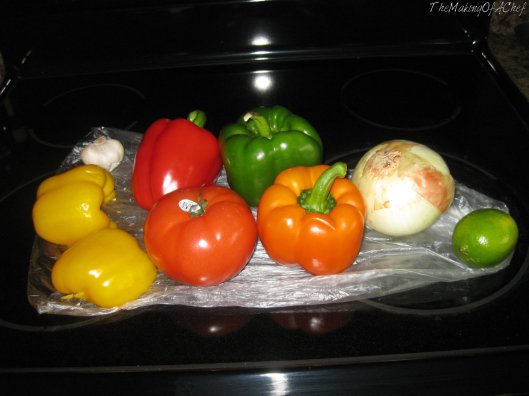 Next, I began halving the peppers shown. I only needed half of each of them (and it STILL yielded a big bowl). 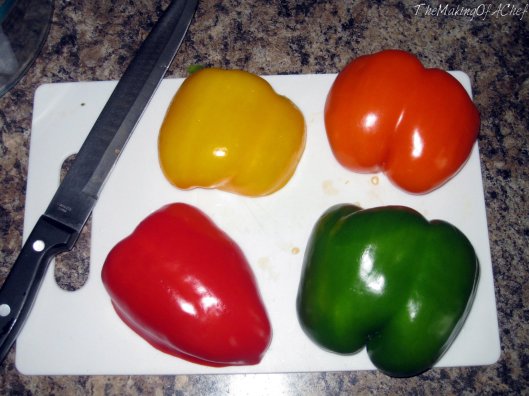 I sliced the yellow pepper first (and didn’t even think of taking pictures, how silly of me) and then moved on to cutting up the tomato. (I was just going with the flow of things in all honesty) 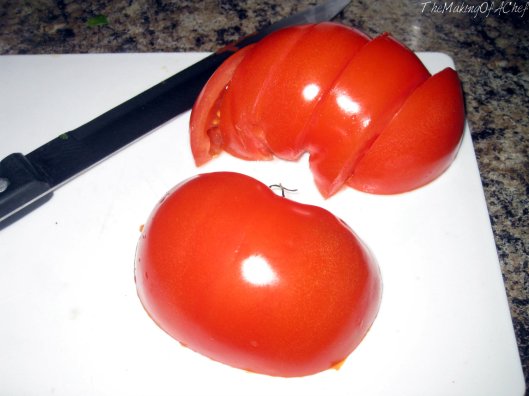 My tomato. Half went into the food processor and half went, chopped, into the big bowl of everything

By this time, with the peppers halved, and the tomato cut, the kitchen began to smell really good and I hadn’t even began cooking yet. Here’s my tomato purée: 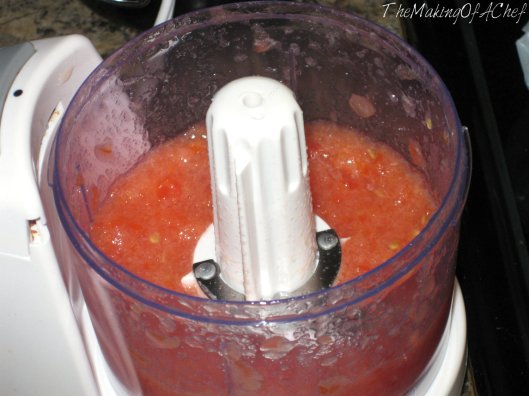 This is before I added 4 cloves of garlic, a half a cup of water and chopped onion to it.

After I’d puréed half of the tomato, I sliced the other half and was pretty proud of my handiwork (I’m notoriously bad at uniformly chopping vegetables, or anything for that matter). 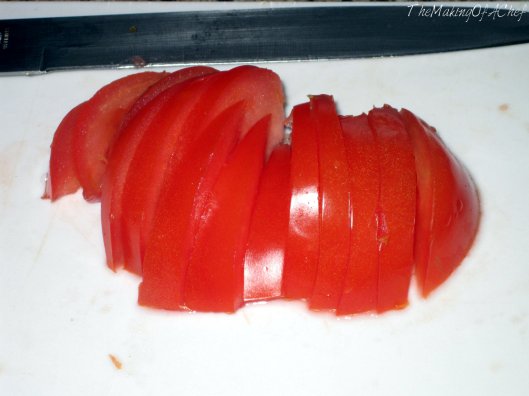 After I’d puréed the tomato, chopped the other half and put it into the bowl where I was putting things, I went back to chopping peppers. 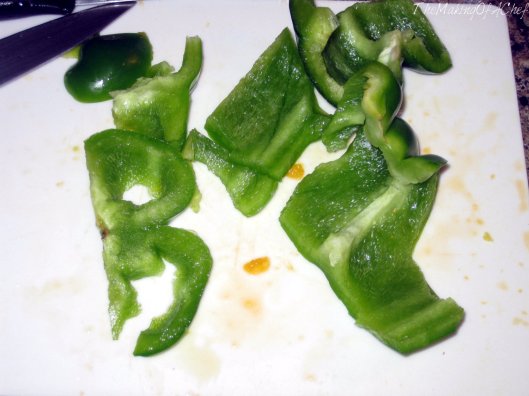 This doesn't look "chopped" so much as "wrecked" but I still managed to get it into uniform, tiny cubes.

Something about the red pepper came out amazing. I also tried a bit of it and found that it was delicious (I’d never had raw red bell pepper before). 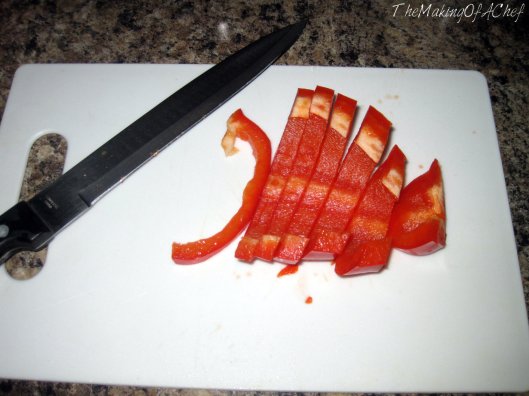 Look how uniform that is?! I couldn't help but be proud of myself.

After the red pepper, I cleaned the knife and began chopping the onion… after I managed to get the knife through it. 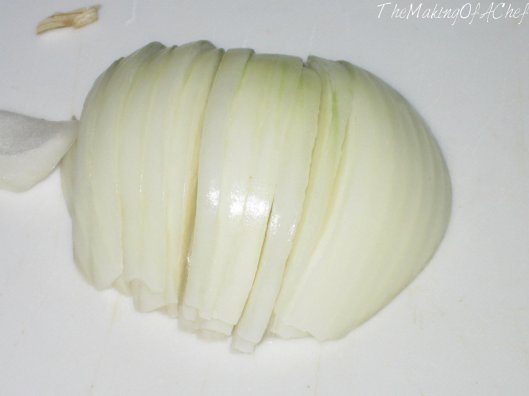 The onion, picture one.

For some reason, I really found my groove once I began chopping up the onion. 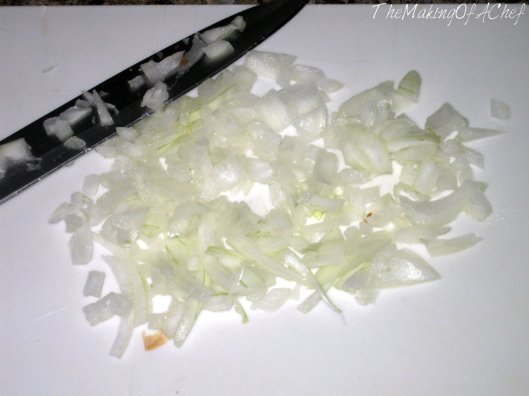 It's not the most uniform, but still looks good, doesn't it?

Though it’s not shown (I was too giddy over mincing the garlic to stop and grab a picture of how it came out), I minced four cloves of garlic and they were added to the tomato purée with a 1/4 cup of the onions that I chopped.

Finally, juice of one lime: 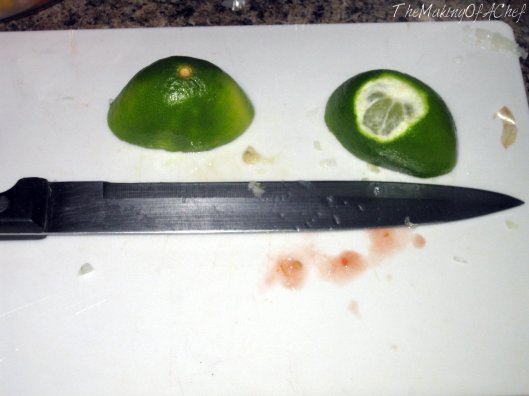 This is the finished product (I think I need more tomato purée): 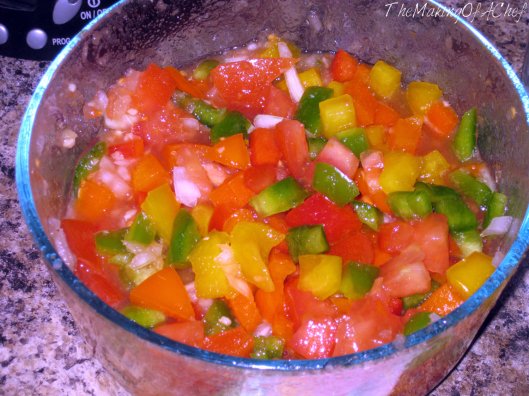 Once the lid was on and the bowl shaken generously, I put the salsa into the fridge to chill while lunch was made. I went with a classic that I can make with my eyes closed at this point: Stove-top chicken and rice.

As always, it started off by gathering the ingredients. 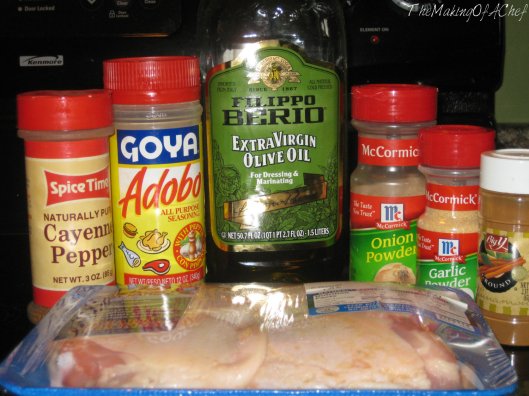 Back, left to right: Cayenne Pepper, Goya, Olive Oil, onion powder (even though I did have a full onion at my disposal), garlic powder, and something new: cinnamon. 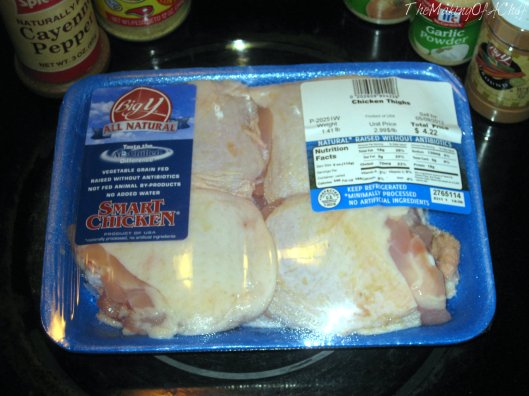 I had to get my hands dirty (even though they already smelled like garlic from mincing it): 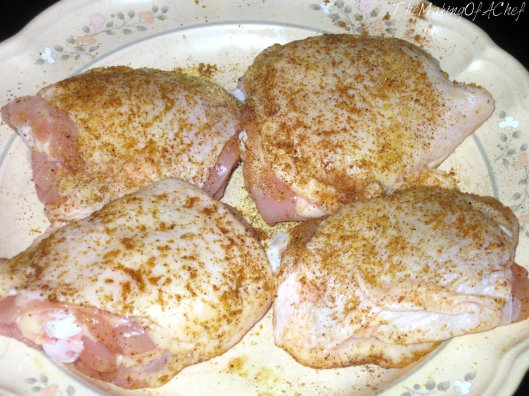 Ready to go in the pan 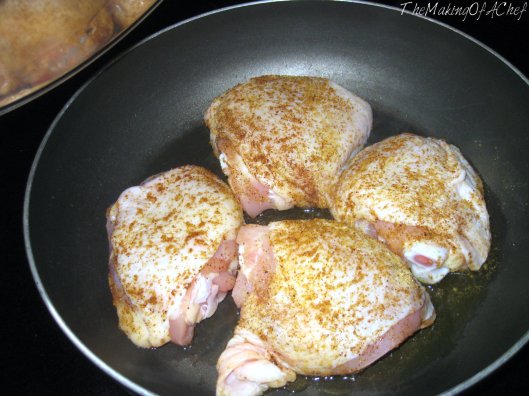 While the bottom seared 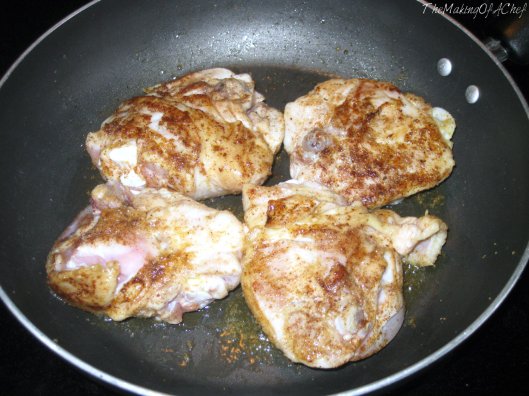 While the top seared

There was something about the cinnamon that gave a whole new layer to the aroma. Even when I braised the chicken, it was present, but not cloyingly so. 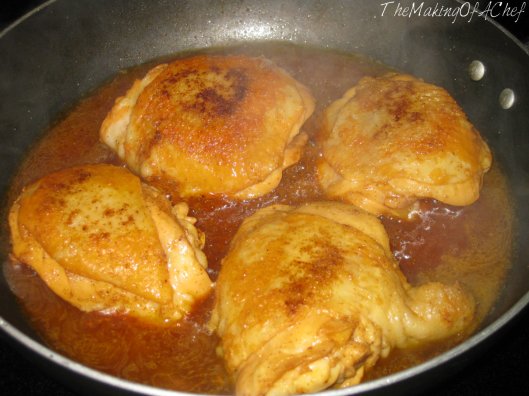 The chicken braised for about 45 minutes to an hour (I lost track of time) and this was taken while I waited for the rice to finish cooking. 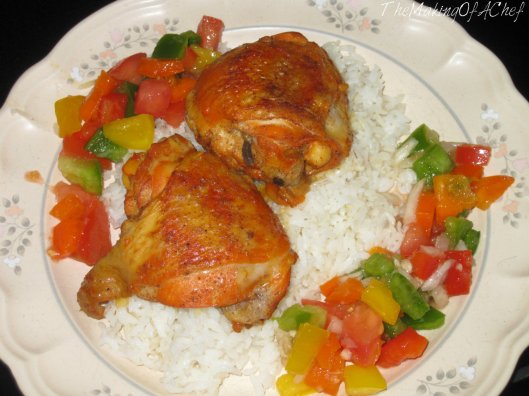 Braised bone-in chicken thighs served on a bed of white rice with salsa on the sides, literally.

Can be kept for up to a week in an airtight container, though it probably won’t last that long.