The worst meal that I’ve cooked (to date) occurred this past weekend.

It was Saturday night when this happened. I was making the chicken dish that I know I have made more than a handful of times. It’s a simple, delicious dish normally full of flavour, and oh so easy to clean up afterwards. How could I not make it? I had everything I needed: chicken, rice, bell peppers… you get the idea.

Normally, this dish leaves your mouth watering; a myriad of textures and flavours grace your tongue leaving you hungry for more. Not Saturday.

Somehow, I managed to seriously mess up the chicken. The rice was fine, as were the bell peppers, but the chicken was awful and my companion had no problem telling me flat-out that it was terrible.

The thing is: I know that my cooking isn’t perfect, nor will it always be great. We all make mistakes; but when I, on top of the person that I’m cooking for, think that it was awful, then there’s a problem. Luckily, I learned from my mistakes.

It started out like any other night, I gathered up the ingredients I would be using. 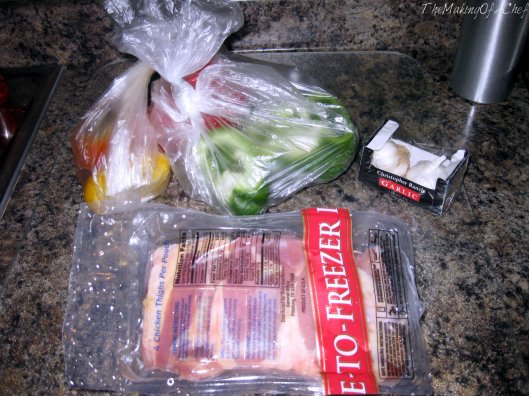 Before I bothered with the peppers, I put the chicken into a pan in the sink and immediately began filling it with hot water because it was still frozen. Once the pan was full, I all but turned off the water, leaving it barely a trickle*. When that was done, I began working with the peppers.

I pitted them, washed them, and then began chopping them.

As soon as they were chopped up and into a pan with oil on the stove, I turned my attention back towards the chicken. After I retrieved the chicken from the pan, I grabbed the spices that I would use. 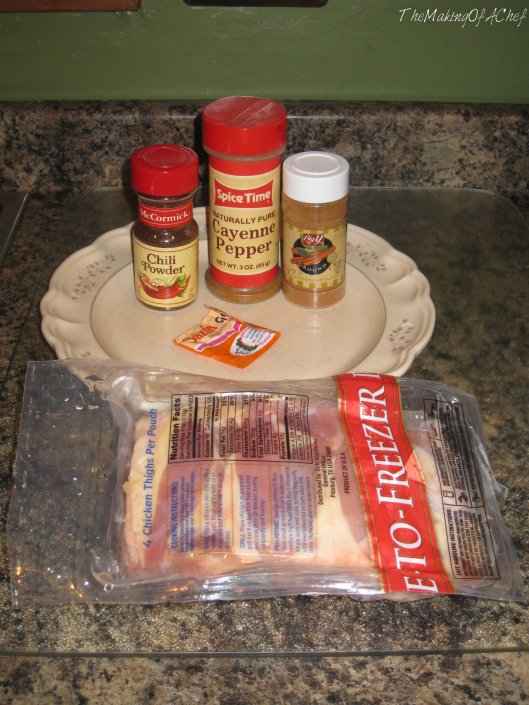 This is where things, I imagine, took a turn for the worst. The chicken had thawed on the outside, but still frozen solid on the inside. I managed to separate one of the thighs from the rest, but that was the best I could do. 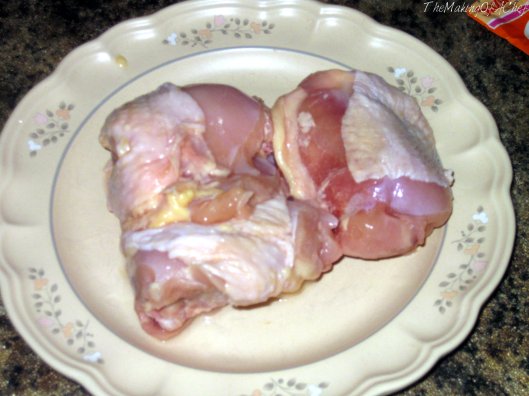 A brief tangent: I do not like using frozen meats at all. Whenever given the chance (about 90% of the time) I indulge and use fresh chicken/beef/pork/fish; it’s disgusting. One of the worst things about using frozen meats is that if you’re in a rush and need to thaw something (like I was), you can’t exactly use a hot water bath (like I had) and expect it to work. No, instead you’re left to use the microwave to thaw it. When using the microwave to thaw meat of any kind (which I do not recommend unless absolutely necessary), the house reeks, especially in the kitchen. The smell is so disgusting that I end up wanting to clean the microwave once I’m done using it. If you have the time, I suggest using the hot water bath or if you know that you’re going to do this ahead of time (unfortunately I didn’t), thaw it in the fridge for two days in advance. But the optimum thing to do is to use fresh meat and avoid the whole debacle.

Tangent aside, I ended up defrosting the chicken in the microwave and hated every second of it. While the chicken defrosted some more, I checked on the peppers.

They weren’t as hard as they had been when I first put them in, but they still weren’t cooked to my liking (nor would they be until the chicken was finished).

After the chicken had finished thawing, I rinsed it off and set about with business as usual, seasoning the chicken. 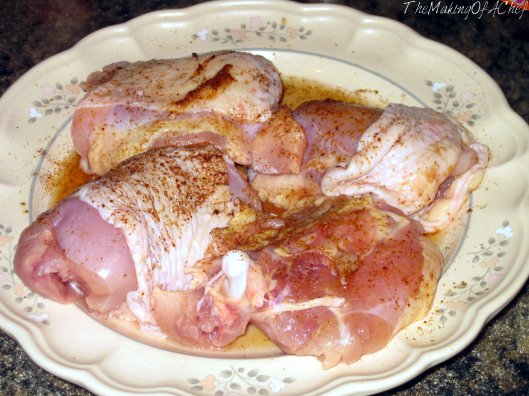 I barely used any cinnamon at all on the chicken, yet I suspect, that’s what it was that made it so awful. Yet, the last time I had done this, the chicken came out delicious.

While the chicken sat and came to room temperature, I began chopping up the garlic.

While prepping the garlic, I managed to get the skin off one of the cloves in one piece without any hassle. I was rather impressed with myself, to say the least.

While I had been mincing up the garlic, oil on the stove had been heating over medium-low heat and whereupon I finished, I added it to the pan. Not long after, it began delightfully fragrant and golden.

Not long after the garlic was fragrant, I turned up the heat and added the chicken to the pan. 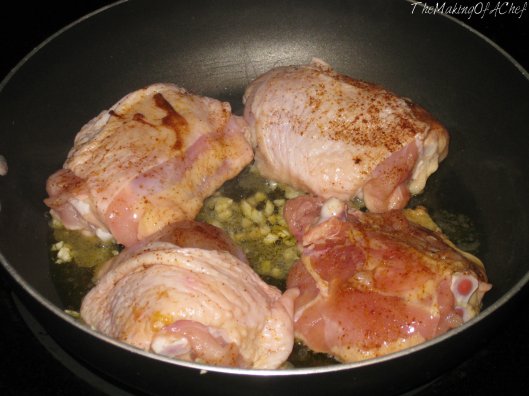 After I had browned the chicken for about four (4) minutes on both sides, I added the water and sazon (like I always do), cranked up the heat and put a lid on it.

I let the chicken cook for twenty (20) minutes before turning it over so that it would stay moist and cook evenly.

While the chicken cooked, I checked on the peppers, by this point, they were starting to look delicious and how I was used to eating them. 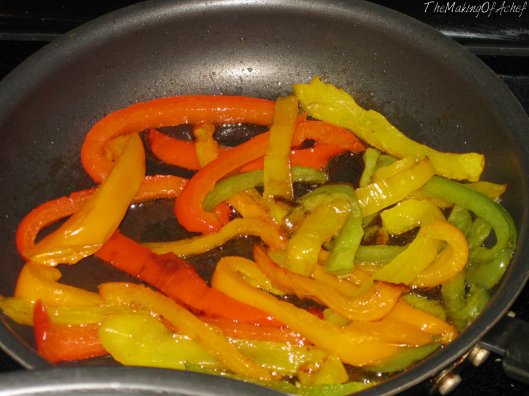 Though the peppers were nearly done, every time I cut into the chicken, it “bled”. By bled, I mean, there were pink juices running from it. It was extremely disconcerting. Yet, I trusted myself enough not to cut into it at thirty-five (35) minutes in. I thought it was done and I had been cooking it on high since it had been in the pan. So, I plated.

My plate with sautéed peppers served over a bed of white rice. 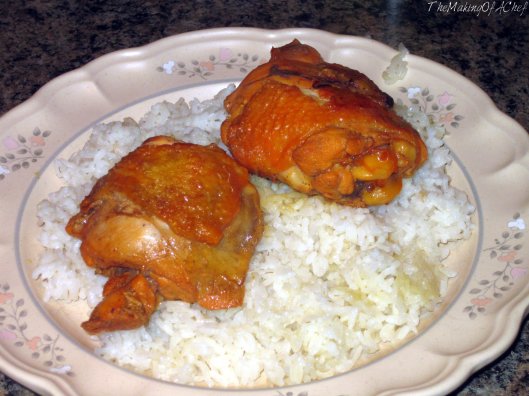 Josh’s plate, without peppers, because even though he loves the flavour they add, he hates their texture

As soon as we were sitting down, I cut in the chicken and to my dismay, it wasn’t done. Though it did not “bleed”, it was still atrociously pink on the inside and I told Josh not to eat it. I didn’t know what else to do and put the chicken in the microwave, cooking it for an extra five (5) minutes on high. When it came back out, it was fully cooked, however, it was disgusting. I didn’t like the flavour at all, nor did Josh. Needless to say, after a few bites, I pushed my chicken (now fully cooked) to the side and just ate the rice. Josh, being the sweet (yet honest) boyfriend that he is, ate the chicken (despite my vehement insisting that he didn’t have to) and the rice.

Honestly, after that debacle, I have no interest in making the chicken that way again. For one, I make it that way entirely too much and have grown sick of making it that way. Two, the bad experience turned me off of cooking it that way. Josh and I both agree that next time, I should try something different. Since the incident, I’ve looked at countless different recipes that I can try making. So far, I’ve stumbled upon barbecued chicken, which I haven’t tried yet. I also have yet to make chicken cacciatore, neither from scratch or with the simmering sauce that I got from Stonewall Kitchen.

Here’s to hoping that next time I cook (I’ve not done any cooking since that happened), it won’t be disastrous.

*According to Serv-Safe food safety (which I have my certificate in), you’re supposed to leave the water barely running so as the water will never become stagnant. Stagnant water collects bacteria which can gather on the food and lead to foodborne illness.

7 thoughts on “The Worst Meal That I Ever Did Make”