Lately, I’ve been stepping out of the box with my cooking. Sometimes it goes well, other times, not so much. I’d like to color my experience with turkey sausage a success… save for the excessive garlic taste, but that can be easily resolved.

Earlier this month, Josh and I were out shopping and I saw the latest issue of Food Network magazine sitting on the rack and I had to have it. How could I not? The dish on the cover looked absolutely delicious. Funnily enough, after buying the magazine, it just sat next to my bed for a couple of days. One afternoon, I pawed through it to look for the recipe that was featured on the front cover. I glanced at it, decided I would make it eventually, then set the magazine back down. It wasn’t until Thursday morning when I sat at break talking with coworkers while eating leftovers that I figured I would make it.

There’s something about talking to coworkers about my cooking that motivates me to cook. It might have to do with the fact that I offered the pair I was sitting with a bowl of the pasta and turkey meatballs. This was because they didn’t want to hear of it unless I was bringing it in. What choice did I really have?

So that night after work I did a bit of grocery shopping and got what I would need. After putting everything else away, I assembled everything the recipe called for. 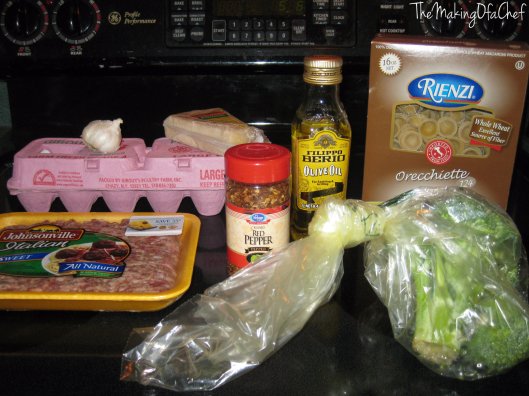 Ingredients!
Back row (left to right): eggs, a bulb of garlic, olive oil and whole wheat orechiette pasta.
Front: Italian Sausage, red pepper flakes & some broccoli.
(some side notes: ever since I’ve had whole wheat pasta, I don’t usually touch the regular stuff any more  The recipe actually calls for broccolini but the market I shop at doesn’t have that. Real shocking.)

I started out by following the recipe where it said to roll the sausage into meatballs. That quickly grew old and I utilized mum’s petite ice cream scoop to get the tiny meatballs that I would need. Not long after getting a batch done, I fried them up.

Soon after getting both batches fried up, I let them drain on a paper towel lined plate while the pasta finished cooking.

When the pasta and broccoli finished cooking (I didn’t grab any pictures of the pasta raw, in transit or cooked until the very last one), I drained it and set to work sautéeing the red pepper flakes and some of garlic in some oil 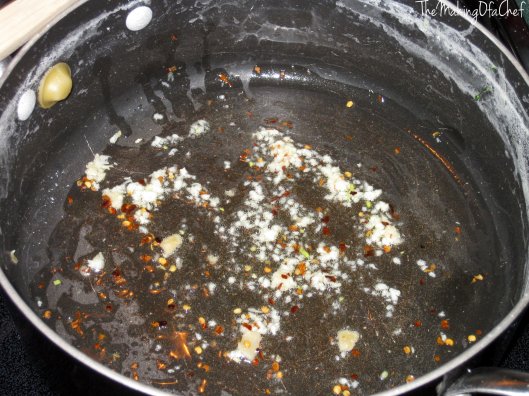 I’m a sucker for only having to wash a couple of dishes rather than dirtying up three or four.

Not long after the garlic began to grow puffy, golden and aromatic I reintroduced the orechiette and broccoli into the pan and added the egg that had been whisked with cooking water (something else I didn’t take a picture of).

Orechiette with turkey meatballs and broccoli. Or, in simple terms: pasta, some kind of meat and a vegetable.